I hadn’t planned to catch a train from Amsterdam to London. I had my flight booked and an easy 45 minutes or so in the air already planned.
Yet the weather had a different plan…
And this is the story of how travel disruption turned from very stressful into a nice adventure :-)

Monday 11 December 2017. Snow, fog and strong wind cause the cancellation of 95% of flights out of Schiphol airport.

When at 5pm announcements were made that also my flight (initially scheduled for 2pm then delayed to 7pm) was no longer going, panic seeped in! I have to be back in London within 24 hours due to more travels planned, and there are no seats on other flights until Wednesday, I cried to the desk agent – how the heck am I going to make it?!
To add to the misery and mayhem, also all trains from Schiphol were cancelled due to bad weather conditions. The only way out of the airport was to catch a taxi. Welcome to a two-hour queue then :-(. 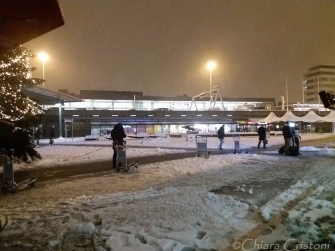 Snow at Schiphol – not too dramatic really! 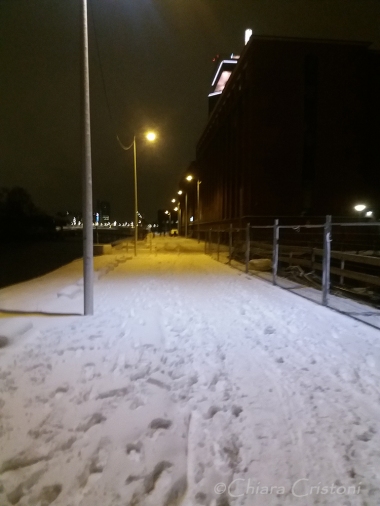 Based on the EU regulation Nr. 261/2004 on “compensation and assistance to passengers in the event of denied boarding, flight cancellations, or long delays of flights”, I was reassured that my airline would reimburse any additional expenses incurred (within set limits). So I went ahead with taxi and hotel booking in Amsterdam for the night.

And to get to London? Then train will have to be! Intercity from Amsterdam to Brussels then Eurostar from Brussels to London. It would take me most of the following day but at least there were seats. And a chance to get home!

It was sunny with blue skies in Amsterdam the following morning. I took a stroll around Amsterdam Centraal train station to enjoy the snow. But it was soon time to catch the train.

Amsterdam by the water

And here I am, on board of the Intercity train to Brussels. Slower but much cheaper than the Thalys, it felt like being back to the days when train journeys across Europe (good old InterRail!) were the norm. Slow travel. Stare out of the window. Enjoy the moment.

The scenery was lovely – snow covered the fields, the streets, the roofs of the houses. White everywhere, shining in the sunlight of a beautiful day with bright blue skies.

On the Intercity train 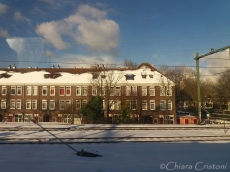 The Brussels-London stretch wasn’t as interesting. I slept most of the two hours on the Eurostar, it was dark outside and in the tunnel under the Channel. I had finally relaxed, knowing that I would make it home in time to unpack my bag, repack it for the tropics, and fly out again the following morning!

my claim for a refund, once I got home I immediately submitted it online, uploading all receipts for transport, accommodation and meals costs incurred as the result of the flight cancellation. (Update Jan 2018: in less than a month I received full reimbursement of all additional expenses!).

If your travel plans are ever disrupted in a similar way and you find yourself stuck, try and see the bright side to it as you can turn it into another adventure :-)