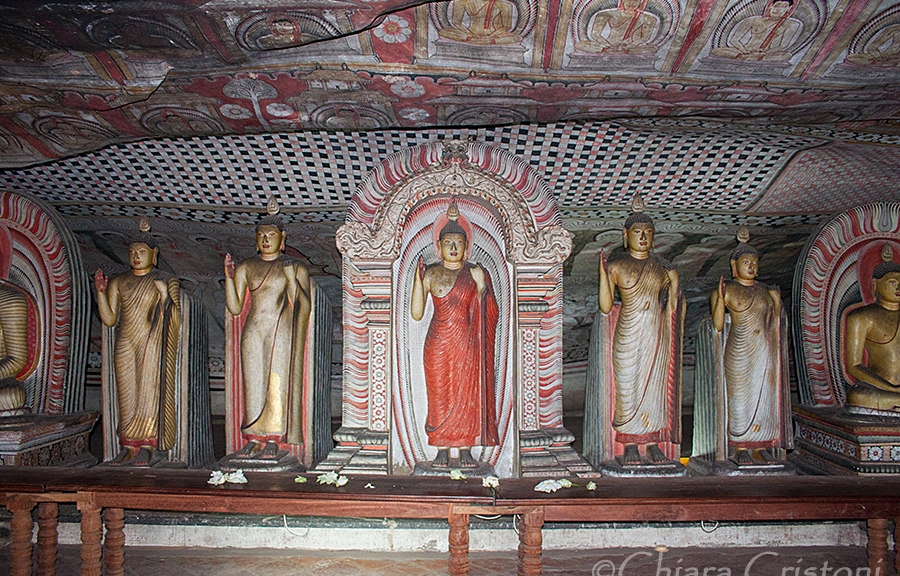 Dambulla, in central Sri Lanka, has the largest and best preserved cave temple complex of the whole country. Known as the Dambulla Cave Temple or the Golden Temple of Dambulla, it is made of around 80 caves, although only 5 of them are open to the public. Built at the base of a 160m-high rock, these caves have been converted into shrine rooms and contain statues and paintings related to Buddha and his life. There are a few statues of reclining Buddhas, up to 15m-long, as well as statues of standing and seating Buddhas. The whole complex is quite impressive and in 1991 it was declared a UNESCO World Heritage Site.

Buddha statue in the Cave Temple

Paintings in the Cave Temple 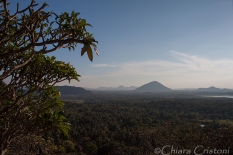 View from the Cave Temple

Outside the Cave Temple 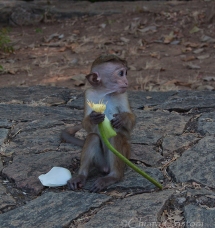 Monkey at the Cave Temple

Monkeys grooming at the Cave Temple

Women walking down the hill from the Cave Temple

But there is more to discover in Dambulla than the world-renowned cave temple! This town also hosts the largest wholesale produce market of Sri Lanka, something that wouldn’t usually appear on a tourist wishlist but is actually a great place to see and photograph people. I spent over an hour there, going from feeling quite shy at the start (hundreds of men were staring at me as I walked around huge vegetable bags and trucks and started taking photos) to being pulled here and there as some workers really wanted to feature in my pictures! I ended up having really good laughs with some of them.

Fish at the Fresh Produce Market

So allocate some time to Dambulla in your Sri Lanka trip, either as a stopover or as a daytrip from Sigiriya, and you won’t be disappointed!

AKA: the ascent to heaven is best not done wearing flip flops.

The Marble Mountains are marble and limestone hills located between Hoi An and Da Nang, about 20Km from Hoi An. You can visit them independently, and reach them by motorbike/xe om/ local bus, but I chose the lazy option and joined a tour. Lucky enough I was the only person on it, so had a private guide and driver for half a day!

So, back to the Marble Mountains: there are five of them and they are also called the Mountains of the Five Elements (water, metal, fire, wood, and earth).  They are of great importance to the Vietnamese and are dotted with Buddhist and Hindu temples and pagodas. 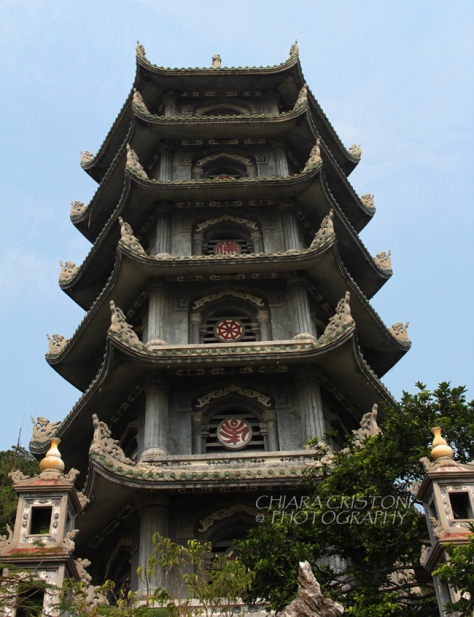 They were also a base for Viet Cong fighters during the  war.

Nowadays the most visited peak is the Water mountain – Thuy Son – which is also the tallest.
After visiting a couple of cave pagodas there, my guide told me that we would follow the path to heaven and led me to the very top of the mountain through narrow, slippery and steep tunnels. Caving and rock climbing in flip flops!
(Now I know how I will go to heaven, I thought at some point…).

When I reached the top I felt like I had climbed the Everest! This was also an opportunity for lots of photos of the coast and the other four mountains.

I also visited the largest and most impressive cave on the Water mountain (Huyen Khong cave), where a huge Buddha statue towers over everything and stalactites resemble animals and human faces. Sunlight streams enter the cave from the roof, and create a very dramatic atmosphere.

The Marble Mountains are also famous for their stone engraving activities, although marble now comes from other areas of Vietnam instead of being extracted locally. Several souvenir shops located at the base of the mountains will try to sell you marble objects of any sorts, the most popular being the “Happy Buddha”. Rubbing its belly supposedly brings good luck!

And no, I didn’t buy one but under my guide’s advice I made sure that I gave a good belly rub to one of the big Buddha statues on the Water mountain :-).