The south-west coast of Sri Lanka has been for some time the most popular with tourists. Beautiful sandy beaches lined with palm trees, blue water and amazing sunsets attracts tourists in flocks. Fancy staying in boutique hotels and get pampered all day? Head to Bentota. Are you a fan of backpacker hangouts and just want to surf and party? Try Hikkaduwa or Ahangama.

I did it differently and based myself in Unawatuna because of its closeness to Galle, then split my beach time between Rumassala and Mirissa.

Rumassala beach, in Unawatuna, is nothing to write home about in terms of sand and sea. Yet if you enjoy experiencing local life, you will end up stuck for hours watching the fishermen pulling their nets in at the end of the day. Like I did. For over 1.5 hours I watched at least 15 men pulling their long nets up the beach, singing and encouraging each other, their muscles all tensed in the huge effort required. It was fascinating! The sun setting on the horizon gave a very atmospheric touch to the scene.
It was almost dark when the last bit of the net made it to the beach. Fishermen, locals and tourists all gathered around the disappointingly small catch, hoping in better luck for the next time.

Fishermen pulling their nets in 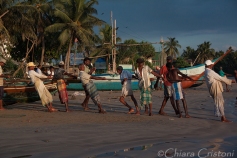 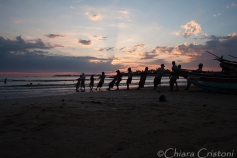 Mirissa beach will not disappoint your expectations of a typical tropical beach. Located about 1-hour bus ride away from Unawatuna (Rs 60), Mirissa beach is a long strip of golden sand with beautiful clear blue waters, strong winds and powerful waves.  A rocky outcrop on the eastern end of the beach can be easily reached at low tide and you will see tourists walking up to its top to enjoy the view from above.
On my only full day as beach bum, I did a good job at lying in the sun to top up my still poor tan, cooling down at various beach restaurants/cafes sipping coconut water from a fresh coconut, and dipping in and out of the ocean at the western end of the beach, the quieter one. 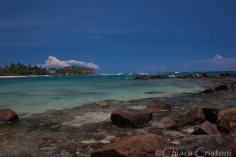 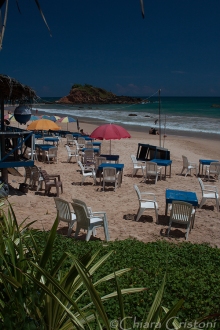 Later in the afternoon I hopped on a bus to Koggala and headed to the beach there, where I caught the most beautiful sunset of my entire two weeks in Sri Lanka! The sun fired up the sky with amazing red and orange colours and I watched in awe until darkness started settling in.

I rushed to the bus stop to catch a bus back to Rumassala before full darkness, while breathing in my last night in southern Sri Lanka.